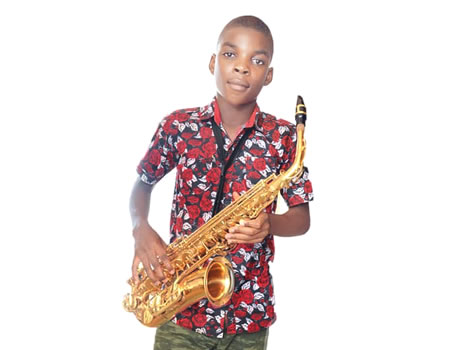 Young, determined, hardworking and gifted Samuel Ajewole Omitade, has hit the road with his debut single in a bid to take the world music scene by storm, and with his horn.

Samuel Ajewole Omitade, with the stage name Sammy Flow, born on June 14, 2010 has been playing the saxophone for a number of years but has decided to take it to the next level with the production of some songs in the contemporary music genre, incorporating afro-pop and soul.

Young Sammy’s maturity in his sound brings that feeling that the future hold much for him while he has a lot to offer the music industry, because his saxophone work is such that belies his age.

In other works such as ‘My Comforter’ and ‘Rain of Blessing’, which are other singles that are ready along with Renew the World, which featured Titilope Osabusua and Benjamin Ayanleke, Sammy has shown that he is not ready to deviate from the strengthening his Christian faith.

The promising young man is still under the mentorship of his cleric father and other experienced hands in the business, while he is mentored further to continue to hone his skill and work on his education.

In the meanwhile, accept the offering by Sammy Flow and flow with his cool sax and smooth voice.

We’re on a mission to build Africa into a world power in 10 years —Oluwatoyin Banjo, project director, Ideation Hub Africa