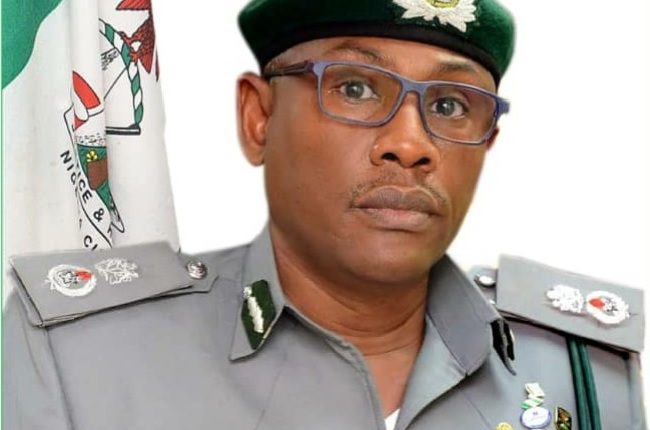 The Controller of the Apapa Customs Command of the Nigerian Customs Service, Comptroller Mohammed Abba-Kura, on Thursday, said ten of his officers contracted the COVID-19 disease and were treated at the Lagos University Teaching Hospital (LUTH).

This is even as the Controller stated that any vessel Red-Flagged for issues with health or safety concern will not be boarded by his officers until cleared by relevant government agencies.

Addressing maritime journalists in his office, on Thursday, Comptroller Mohammed Abba-Kura explained that there is no way the Command can stop physical examination of cargoes for now because of the fear of COVID-19, that rather, it is important for individuals to observe physical hygiene while carrying out port activities.

According to Abba-Kura, “When two of my officers tested positive to the COVID-19 virus, I ordered that the entire unit where those two were working should go for testing, and it was later discovered that another eight had the virus.

“They have all been treated at LUTH and discharged. It is important that people observe personal hygiene when working in a place like the ports. Look at these face mask, it is supposed to be disposable after use, but you will see people using it for days without disposing after first use.

“Now, most of my officers are better informed following training that was carried out by Doctors sent to us from the Customs headquarters in Abuja.”

ALSO READ: (OPINION) COVID-19: Listening to what WHO says about SCOAN

On the Red-Flag raised by the Nigerian Maritime Administration and Safety Agency (NIMASA) on 13 ships that had visited COVID-19 high prone countries, the Comptroller stated that any ship that has been flagged by necessary Government agencies over health or safety concern will not be boarded by Customs officers until duly cleared by relevant agencies of government handling such issue.

On revenue generation, the Controller revealed that it generated about N52.369 billion from export trade and N227.347 billion revenue between January and June 2020.

The Apapa Customs Controller also added that the total of the goods exported from Nigeria stood at 1.642 million tonnes with Free On Board (FOB) value, adding that the exported goods include; agricultural products mineral resources and steel bars amongst others.

On monthly revenue income, he said there is a steady improvement in revenue collection all through the half of the year except for the month of May, which recorded a decline of about N3.531 billion when compared between the year 2019 and 2020.

“The command in the half-year of 2019 collected a total sum of N203.264 billion as Customs duty and others like 7 per cent surcharge, VAT, 1 per cent Comprehensive Import Supervision Scheme (CISS) among others. The N227.3 billion the command collected between January and June 2020 represents an increase of N24.082 billion or 10.59 per cent increase from the previous year.

“In this regard, the command’s collective resolution to enforce the Federal Government Fiscal Policy measures had yielded the desired results as could be seen from the revenue Profile. Also, the command’s secondary layers of checks and balances have contributed immensely in recovering lost revenues that escaped the first layer in one way or the other,” the Controller explained

On seizures, the Controller stated that “the command has seized a total of 142 containers of various items worth N15.904 billion. The breakdown includes two assorted vehicles, which is one Rolls Royce 2018 and 1 Lamborghini Huracan Sports Car 2019.

“In addition to seizing these goods, we have equally invoked the provisions of section 167 of CEMA, which deals with detention, seizure and condemnation of goods. All seized items have been condemned by a court of competent jurisdiction, Federal High Court, and have now become the properties of the Federal Government of Nigeria.”