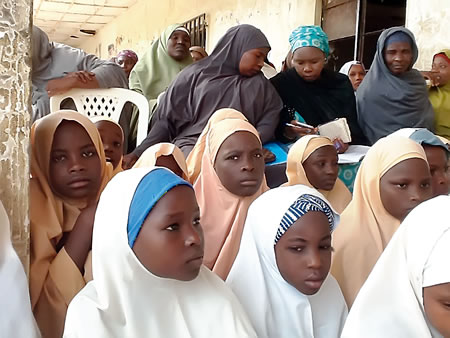 Nigeria has been rated as one of the countries with the highest number of out-of-school children estimated at 10.5 million across the country. This is despite various initiatives adopted by government and other critical stakeholders to address the phenomenon. CLEMENT IDOKO, in this report, noted the vital role of the School Based Management Committees (SBMC) in dealing with the challenge.

She was rescued by a member of Mothers Association from the streets of Kano, hawking wares for her mother to augment family income. She moved across the streets carrying a tray of groundnuts all day, and in some cases meandering through trails of vehicular gridlocks in search of buyers. She had no inkling that she would one day be in school.

However, the 13-year-old Isirah Samiu, for that is her name, is now looking sublime, neat, and beautiful in her school uniform donned with hijab at Ja’en Special Primary School, Gwale Local Government Area of Kano State, when Nigerian Tribune visited the school recently.

Samiu, and many other school-age children who have been rescued from street hawking and enrolled in schools by the School Based Management Committees (SBMCs), was one of the reasons why the United Nations Children’s Fund (UNICEF) in collaboration with the Child’s Right Bureau of the Federal Ministry of Information organised a two-day media dialogue on SBMCs in Kano.

“I am happy to be in school. I no longer hawk for my mother. They teach us how to sew clothes, make beads, soap, and I do them for my mother to sell. One member of Mothers’ Association of this school brought me to school. I am now in class 4 and I want to go to university,” Samiu said with the help of the interpretation by the head teacher of the Girl’s Child Vocational Education Centre, of Ja’en Special Primary School, Gwale, Mrs Abu Suleiman.

Mrs Suleiman told Nigerian Tribune during the field trip to the school as part of the programme for the two-day media dialogue on SBMCs, that the school with the support of SBMC is into farming, gardening, car wash and training of girls on vocational skills in order to be self-reliant after graduation.

“Parents come to commend us when they see how their children are doing at home. Some of them bring what their daughters have produced to show to us. We teach them how to make the liquid soap, beads, tailoring. Some of the school uniforms are shown by our pupils. We also teach them how to cook. All that is in addition to normal basic education school curriculum the school is implementing,” she said.

UNICEF under its Girls Education Project (GEP3), being funded by the United Kingdom’s Department for International Development (DFID), is supporting the SBMCs in six states in the north, namely: Kano, Sokoto, Zamfara, Katsina, Bauchi and Niger.

Ja’en Special Primary School is one of the over 4,500 primary schools on the SBMC scheme in Kano State, with tangible evidence of increased school enrolment as well as improved infrastructural development through the efforts of the SBMCs in the schools.

Headmaster of Ja’en Special Primary School, Gwale, Mr Abba Mohammed said the school which was established in 1974 with 42 pupils now has a total pupils’ population of 4190 with 62 teachers. While 2057 pupils are males, 2133 from primary 1-6 are females.

He revealed that the school enjoys support from DFID under its Education Sector Support Programme in Nigeria (ESSPIN) and that through SBMC in collaboration with the Parents Teachers Association (PTA), Mothers Association (MA), and Community Ownership, the school has provided two mechanised boreholes-one for school consumption and the other for commercial purpose.

He noted that before the establishment of SBMC in 2012 in the school, many members of the host community did not know that the school belonged to them, disclosing that now there is the passion and desire for them to develop the school because they have taken ownership of it.

Some of the achievements of the SBMC at Ja’en Special Primary Schoo, Gwale as listed by its Chairman, Mr Kabiru Ado Ja’en include: renovation of 3 blocks of five classes at N220,500 and establishment of school Garden at N189,000.

Mohammed also noted that the advocacy by the Mothers Association was also helping to reduce the issue of child marriage, saying many parents in past because of poverty, socio-cultural barriers and ignoran refused to send their children to school while most of their young girls were married off at tender age.

SBMC, which was introduced by the Federal Government in 2005, is structured in such a manner that its members are drawn from religious and community leaders, former pupils, women associations, parents, teachers, artisans, among others. The committee is to help complement government efforts in the provision of basic needs and support for improvement of teaching and learning in primary and secondary schools.

Stakeholders have argued that there was the need to inspire quality consciousness in school operators and managers for the attainment of total quality assurance in schools as well as ensuring turn-around in educational effectiveness through the concept of community participation in school management.

Also, the Federal Government believed that to improve education quality, it was vital to advance from classroom teaching level to school organisation level and reform the structural system and management style of schools. This was the basis for the adoption of the School Based Management Committee (SBMC).

According to Dakar Framework of Action (2000), the experience of the past decade has underscored the need for better governance of education systems in terms of efficiency, accountability, transparency and flexibility, so that they could respond more effectively to the diverse and continuously changing needs of learners.

The SBMC helps to sensitise community members on enrolment, attendance, retention and completion of pupils in schools, while also monitor project execution, teaching and learning activities in schools.

They also provide feedback to the community members in order to mobilise resources in support of their schools.

Director, Social Mobilisation, Universal Basic Education Commission (UBEC), Alhaji Bello Kagara, in his presentation at the media dialogue in Kano, disclosed that the Federal Government would this year, invest a total of N2.78 billion in School Based Management intervention programme in 2,505 basic schools across the country.

He explained that the Commission under its School Improvement Programme (SIP), allow the SBMCs to identify areas of needs in their schools, and fund is released to them for execution of the proposed projects on payment of a requisite counterpart fund either in cash or in kind.

Meanwhile, the Kano State SBMC Chairman, Mr Tijjani Baraya, in his presentation at the media dialogue, said SBMC was set up to ensure community ownership of education and that this has bridged the gap between schools and communities.

UNICEF State Project Coordinator, Richard Sheyin Akanet, while presenting overview of the Girls Education Project (GEP 3), in Kano, a programme designed to increase enrolment of children in schools in Northern Nigeria, said the project has recorded huge successes with the support of SBMCs.

He noted that SBMC has been adopted by the governments of Bauchi, Katsina, Sokoto, Zamfara, Kano and Niger States, and has substantially help in reducing the number of out-of-school children.

He said in Kano State, the SBMC has been able to integrate good number of Islamic Qur’anic Schools into formal basic education, adding that the intervention was a deliberate drive to ensure that school aged children who are not in school are enroled while those that dropped are brought back to school.

Akanet said: “GEP 3 programme is with the aim of improving social and economic opportunities for girls while at the same time, improve the capacity of Islamic teachers and other education facilitators in effective skills and knowledge for teaching”.

He added that the SBMC is designed specifically to achieve improved governance in schools and retain girls and good numbers of boys in schools.

He emphasized that by the end of the year 2020, which marks the end of GEP 3 , the programme is expected to return one million girls to school, across the six participating States, through its Integrated Qur’anic Schools.

He said: “Gep 3 has achieved alot in building capacity of the School based management Committee, the SBMC plays key roles because they come together for the development of the school hence the need to improve their capacities

Speaking on the new UNICEF Basic Education Strategy 2019-2030, UNICEF Education Specialist, Muntaka Muktar, said the Integrated Quranic School (IQS) has been identified as an intervention capable of ensuring that all children irrespective of their location in Kano State have the benefit of participating in western education.

According to Muntaka, completion rate of primary education in Kano State is 49 per cent and that the number of girls transiting to lower secondary school is 47 per cent while only 50.4 per cent of males transit to secondary schools.

The black death of sludge