•Faults president’s claim of lifting 10.5 million out of poverty, creating jobs•We have lost more than that in Food and Beverages sector —TUC President 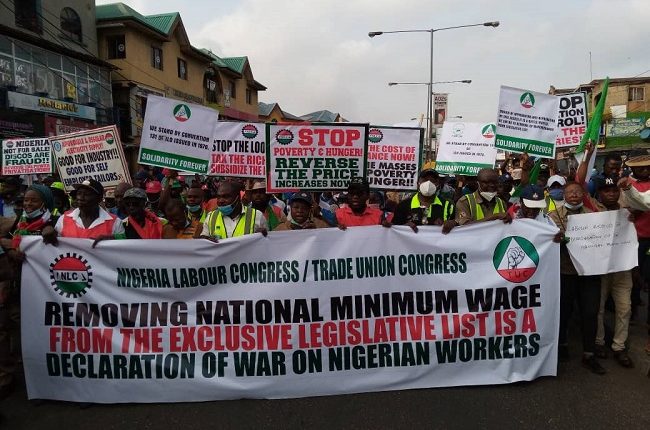 LABOUR reacted angrily at the weekend expressing doubt on the claim by President Muhammadu Buhari that his government has created 10. 5 million jobs, saying that the government must be creating the jobs for ghosts.

Besides, the President of Trade Union Congress (TUC), Comrade Quadri Olaleye, said in the Food, Beverages and Tobacco industry alone, Nigeria has lost more that 10 million workers. Olaleye, who summed up the position of labour on the President’s claim pointed out that “each time we heard that information we feel that they are creating jobs for ghosts because all of us can see in our environment the people that have benefited from those jobs.”

He also questioned the kind of jobs the government of President Buhari was laying claiming to, regretting that the kind of the much acclaimed 774,000 jobs in 774 local governments, as well as the N-power jobs that last for three months, six months and a year are short term jobs without security.

Speaking with Sunday Tribune on Saturday, the TUC president said: “As much as we are not trying to undermine their claim, on the other hand, we should look at a number of job loses while they were creating that one especially through their policies. It is not a rumour that forex is not available for genuine manufacturers to buy their raw materials and as a result of that, we can see that in the Food, Beverages and Tobacco industry alone, we have lost more than what government said they have created. So, what is the sense in you creating one while you are losing 10. Why not concentrate on not losing the one you have already.”

Olaleye added: “I hope part of what they claimed they have created is not the 774,000 jobs they said they created in 774 local governments. I hope they are not part of it because they are not jobs with security, they are short term jobs. When we are counting temporary jobs, with three months, six months and one year, it means there is no sincerity in whatever we are doing and governance is all about sincerity, ability to create hope, for people to know that the future is brighter.

“So, Federal Government should be very transparent in whatever steps they are taking in creating jobs. Since those people they created the jobs for are not ghosts, we should know them and know those who are engaged. Each time we heard that information we feel that they are creating jobs for ghosts. So, we encourage the government to be more proactive in whatever step they want to take in creating more jobs.”

While advising the government, he said, “we have advised them many times to look at their policies.