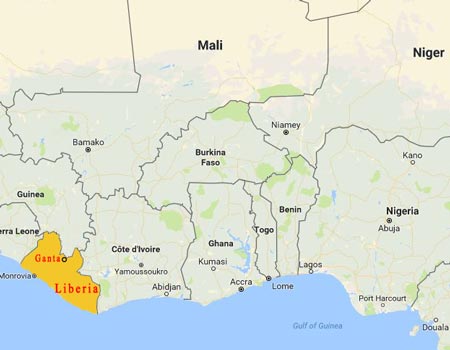 A Non-Governmental Organisation, the Concerned Youth of Ganta for Reconstruction and Development, and a Liberian citizen have sued the Republic of Liberia at the ECOWAS Court of Justice, praying it for an order directing Liberia government to pay $200 million as compensation to over 500 families of Ganta community killed by the Liberian armed forces over land dispute.

The Organisation and Mr. Mamadee F. Donzo also asked the ECOWAS Court in Abuja for “a declaration that the killing, violent attacks, Intimidation, arrest and incarceration of unarmed Indigenous People of Ganta by the Liberian Security Force was unlawful and a crime against humanity.”

“A perpetual order of injunction restraining the Liberian Government, her security agents, privies, proxies from arresting, intimidating, killing, maiming or victimizing the Plaintiff’s and the heads of families of citizens of Ganta District, or brutalizing them  in any manner, or further alienating any portion of their ancestral inheritance, Lands”.

Apart from the $200m monetary compensation, the plaintiffs are also seeking for restitution, satisfaction or guarantees of non-repetition of the illegal killings.

The suit was filed by Ifeanyi Ejiofor for the Concern Youth of the Ganta for Reconstruction and Development and Mr. Mamadee Donzo, the leader of Ganta, on behalf of over 500 displaced and victimized families, heads of Indigenous People of Ganta in Nimba County, Liberia.

The suit was brought in pursuance to the relevant provisions on rights violations in the African Charter on Human and Peoples’ Rights; the International Covenant on Civil and Political Rights; the International Covenant on Economic, Social and Cultural Rights; Economic Community of West Africa State (ECOWAS) Revised Treaty dated 24th July 1993; African Union Convention for the Protection and Assistance of Internally Displaced persons in African; and other related Human Rights Treaties.

According to document in court, Ganta is one of the seven different locations (settlements) that make up Nimba County in Liberia, hugely bedevilled and devastated by the Liberian civil war which led to the fall of the district in 2003.

The people of Ganta were brutalized, killed and consequently chased away by stern looking Liberian security forces dispatched by the Defendant to supervise the taking over of their Land by aliens and illegal occupants, assisted by the Defendant, they claimed.

Another civil unrest was created by this narratives, and following their strong resistance and undying resolve in reclaiming their ancestral home, many lives of the heads of families of Indigenous People of Ganta were lost, as the strong among them succeeded in reclaiming an infinitesimal portions of their inheritance.

No date has been fixed for hearing of the matter.