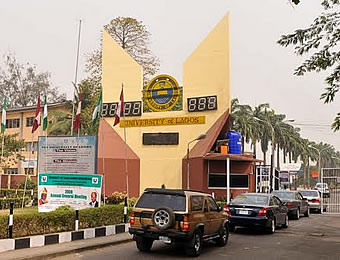 A group of students on Monday staged a protest at the main gate of the university, forcing the management to shut the gate for hours.

According to the protesters who were drawn from a number of schools and organisations including the National Association of Nigerian Students (NANS), the protest was intended to compel the university management to recall the students who were rusticated for their involvement in a violent protest last session.

They also alleged that the university had concluded plans to punish a number of postgraduate students who protested over the hike in hostel fees.

Speaking with Nigerian Tribune, the Chairman of NANS, Lagos, Mr Moses Adewale said they were at Unilag to “sensitize” the students. He said even though the authorities had shut the gate, many of their members were able to “infiltrate” the premises where much of the sensitisation was quietly carried.

“We want to tell them that it is their right to protest. They must not allow the management to intimidate them. We are aware that there is a new policy that restricts students who are above 21 from contesting in departmental and faculty elections. And it is sad that up to now, the management has not lifted the ban on the central student union.”

However, the University of Lagos on Monday afternoon dismissed their claims, adding that none of the protesters were students of the university. A statement issued by the Deputy Registrar (Information), Mr Toyin Adebule, which also contained pictures of students receiving lectures in their classrooms, said academic work was on “without any disruption”

The statement read: “This is to inform the general public that the University of Lagos students are not protesting. The gathering outside the University gate consists of rusticated students and allies. They have challenged the University in court and the case has been struck out.”

There was heavy police presence throughout the protest. The students were later addressed by the Dean of Students’ Affairs, Professor Adeleke who promised to convey their concerns to the university management. The protest ended around 3pm.

My Deputy has made Governance less cumbersome ― Dickson