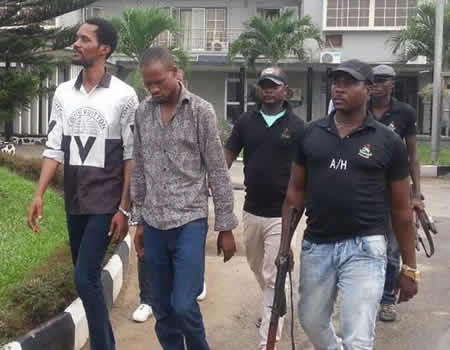 He was arraigned alongside his accomplice, Oyekan Ayomide.

The two accused persons were Slammed with 36 counts charge bordering on conspiracy and fraud.

The offences according to the prosecutor, Mr. Anyigor Innocent, are contrary to sections 8 and 1(1)(a)(B)(3) of Advance Fee Fraud and  Other Related Offences Act 2006, and punishable under section 1(1) of the same Act.

Count one of the charge against the two alleged fraudsters reads: “that you Olajide Oluwaseun Karrem and Oyekan ayomide, on or about 2nd February, 2017, in Lagos, within the jurisdiction of this Honourable court by false pretence and intent to defraud conspired among yourselves to obtain the sum of N2. 450, 000 million; £3000 Pounds Sterling from one Alhaji Isa Adamu, and therefore committed an offence contrary to Section 8 of the Advance Fee Fraud and other Related Offences, and punishable under the same Act.)”.

The two accused pleaded not guilty to all the  counts charge.

Upon their non guilty plea, the prosecutor, Mr. Anyigor, urged the court to remand them in Prison’s custody pending trial.

But their lawyer, A. O. Gbadamoshi, pleaded with the Court to give date for the hearing of his Clients’ bail applications. He informed the court that he his yet to file the application.

Consequently, the presiding judge, Justice Oluremi Oguntoyinbo, ordered that the two accused persons be remanded in Prison’s custody, while adjourned the matter till March 10,  for trial.